A Resource Guide for Nursing Students and Faculty

PICOT is a framework that helps one remember the key components of a well focused question.  The question needs to identify the key problem of the patient, what treatment to consider, alternative treatment considered (if any), what is the outcome you want to avoid or promote, and the timeframe (if any).

PICOT is used to create a researchable question based on a clinical situation encountered.  Based on your PICO question, you will identify keywords and/or subject terms to use in database searches. 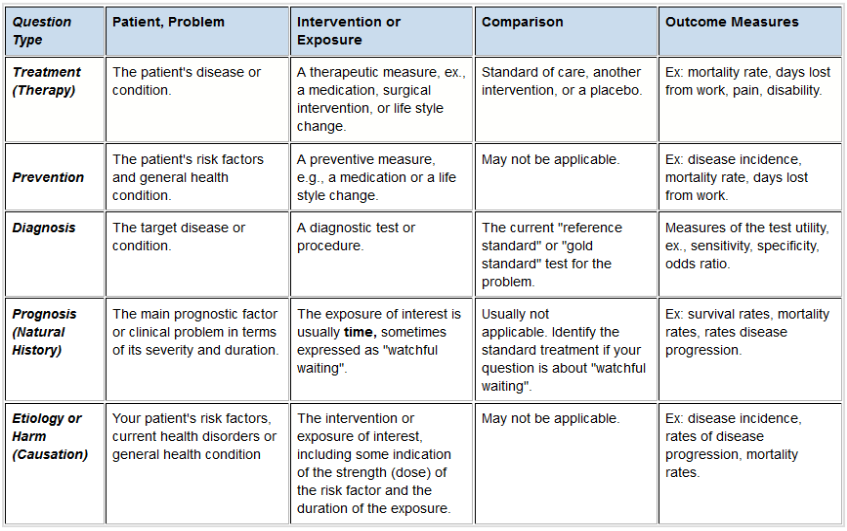 What is a PICOT Question?

The PICOT question format is a consistent "formula" for developing answerable, researchable questions. Writing these questions is deceptively simple. When you write a good one, though, it makes the rest of the process of finding and evaluating evidence much more straightforward. As strange as it sounds, deciding what you are looking for related to your outcome can be one of the hardest parts. When you determine the outcome, it helps you hone the process of searching for evidence. Remember evidence is not just what you want the outcome to be: It is evaluating the evidence supporting or refuting what influences the outcome. If you are interested in getting to the heart of the effect of testing Foley balloons on the rates of UTIs, then you need to find evidence on the pros and cons of testing the balloon.

I: Intervention or variable of interest (exposure to a disease, risk behavior, prognostic factor)

C: Comparison (could be a placebo or "business as usual" as in no disease, absence of risk factor, prognostic factor B)

O: Outcome: (risk of disease, accuracy of a diagnosis, rate of occurrence of adverse outcome)

Note: Not every question will have an intervention (as in a meaning question) or time (when it is implied in another part of the question) component.

Intervention: The nurse’s role as a primary member of the multidisciplinary team regarding perioperative care of the bariatric adolescent patient

Comparison: The nurse's role as a secondary member of the multidisciplinary team without any specialized training and who is only involved in perioperative care of the bariatric adolescent patient

Outcome: When the nurse is involved as one of the primary members in the multidisciplinary team approach, the bariatric adolescent patient has better continuity of care.

3. Therapy PICOT Question: A non-intervention example: What is the duration of recovery (O) for patients with total hip replacement (P) who developed a postoperative infection (I) as opposed to those who did not (C) within the first 6 weeks of recovery (T)?

5. Diagnostic PICOT Question: Is a PKU test (I) done on 2-week-old infants (P) more accurate in diagnosing inborn errors in metabolism (O) compared with PKU tests done at 24 hours of age (C)? Time is implied in 2 weeks and 24 hours old.

6. Prevention PICOT Question: In OR nurses doing a 5-minute scrub (P), what are the differences in the presence and types of microbes (O) found on natural polished nails and nail beds (I) versus artificial nails (C) at the time of surgery (T)?

8. Meaning PICOT Question: How do pregnant women (P) newly diagnosed with diabetes (I) perceive reporting their blood sugar levels (O) to their healthcare providers during their pregnancy and 6 weeks’ postpartum (T)?

This worksheet is from Sonoma State University Nursing LibGuide to help you structure your PICO question.

1. Develop keywords for each of the applicable PICOT elements of your topic. 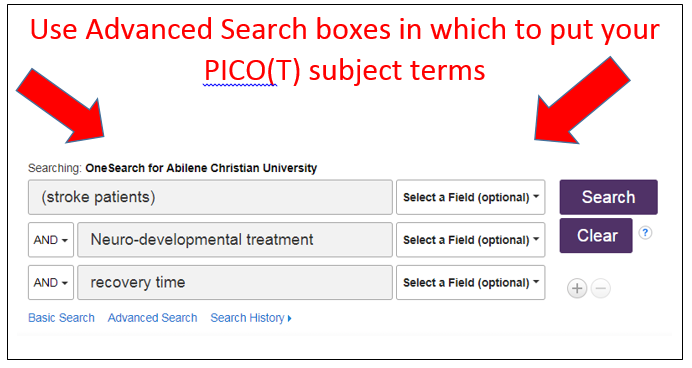 4. Apply limiters found on the left of the screen 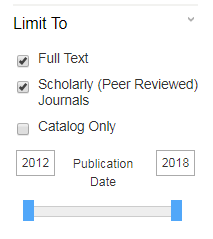